Visual Studio 2019 has been released today but monogame doesn't support templates for vs 2019. I tried to install monogame from the site after installing vs 2019 but templates didn't appear.

I could not find templates for VS 2017 anywhere, so that I had to install VS 2017 to get them. Leaving them here until there is no support of Visual Studio 2019 in the official MonoGame installer.

This Version of the templates in the zip file do not appear in VS2019 for me. I compared them with VS2019 templates and updated the following tags in each of the .vstemplate files. Platform tag of Android is an example for the Android MonoGame project type.

For VS 2019 unzip the VS2019MonoGame.zip file below to:
Documents\Visual Studio 2019\Templates\ProjectTemplates\Visual C#\ instead of the MonoGame.zip above. This will make the different MonoGame project types appear in the project creation screen in VS2019. Make sure you have installed MonoGame for Visual Studio already first. Hope this helps someone.

This will give you a view like below. Select "Games-MonoGame" in the last dropbox filter to see them all. 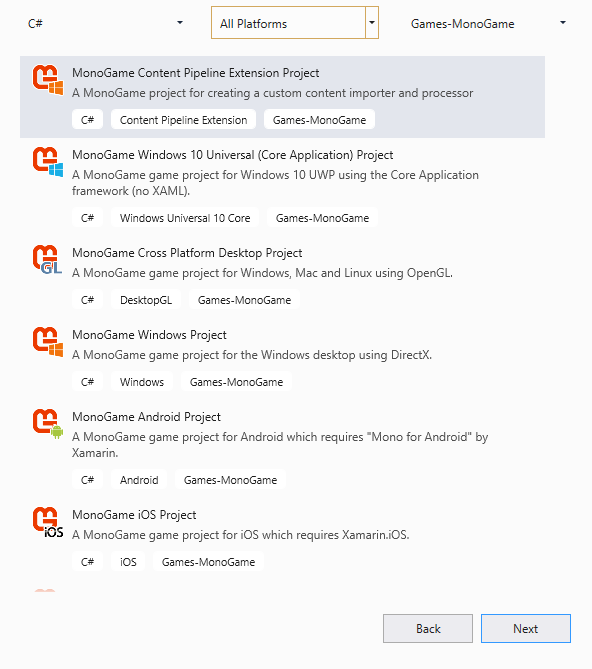 Once the MonoGame Project created I just had to change the default Program used to open the Content.mgcb file, the default path for the MonoGame Pipeline Tool is : C:\Program Files (x86)\MSBuild\MonoGame\v3.0\Tools\Pipeline.exe

Hope it could help someone until MonoGame officially support Visual Studio 2019.

As a workaround you can create the project with this

MonoGame is moving to VS2019, don't worry, support will happen for both the CLI and the regular wizards. For the time being, the current source only support VS2019 through the CLI, while the installer doesn't support it at all. The installer will be dropped and replaced with a nuget-based distribution model, while the templates will be provided by both nugets for the CLI and (we hope so) a VS extension for wizards.

No ETA. If you wish to help speed up this transition process, you are very welcome to check #6879.

Here, just unpack the zip, and than install the .mpack file by going into vs for mac extension manager, and selecting install from file:

I do plan to create a vsix that installs the templates. We should be able to build the vsix from the dotnet templating templates so there's no extra effort involved once it's set up.

I could not find templates for VS 2017 anywhere, so that I had to install VS 2017 to get them. Leaving them here until there is no support of Visual Studio 2019 in the official MonoGame installer.

Only have VS2019 installed, this helps a lot, thanks!

FYI, MonoGame is moving away from traditional Visual Studio templates and is now based on the dotnet CLI. Which means that creating new projects will work with dotnet new instead of the VS wizard.

The VS templates are still around but are likely to be removed soon (altogether with the installer; it will entirely work with nugets).

A new documentation will be put together to explain the CLI.